EDITOR’S NOTE: Part one of a five-part series examining the ease with which all that we hold dear can be hijacked and turned against us in the blink of an eye.

PROLOGUE: As we welcome the heat and splendor that is Summer, here at The Shinbone Star, we deem it necessary to stop the endless news cycle, sniff the roses and remember what used to be.

Now marked by endless scandals, it’s hard to believe that just two months after Donald J. Trump was sworn-in as the 45th president of the United States, things were different.

Back then in the springtime of a new administration, the uplifting notes of chirping birds and the maniacal screams of racists filled the air, and an endless stream of executive orders sprouted like new buds through the melting snow. In those halcyon days, there were only whispers of Russian election meddling, and President Trump was still giddy with leading a fully Republican Congress in the active deconstruction of the administrative state.

Surrounded by a Cabinet of fanatics and zealots, Trump was not just some politician carving out his place in history, but the leader of an invading force hellbent on not simply erasing Barack Obama’s legacy, but 86ing every democratic institution that had been put in place over the last 70 years.

Although consistent with what Trump had been selling during his populist campaign, the combination of a desire to strangle government, melded with the president’s incessant use of social media, yielded what amounted to a blitzkrieg on our democracy. This was no simple changing of the guard.

As our Constitution is shredded and goes down in flames like the old Hindenburg government, let’s wrap up today’s headlines in an old brown shirt, smile and remember how the current administration set out to “Make America Great Again.”

Act One: Influence the masses by aiming at the least intelligent

When Trump began his improbable rise to the presidency, he aimed first at the so-called “Basket of Deplorables,” a group that has always been a part of the conservative base, but had rarely been placed front and center on the mantelpiece.

Armed with his New York wise guy sense of humor and a cheesy red trucker hat, itself a retrofitted ripoff of Ronald Reagan’s old campaign slogan, Trump hit the political scene in 2015 like some kind of half-baked frat boy prank.

The creation of the hat alone should have been enough to know it when we saw it, but somewhere between being a lifelong friend of the original hater, Roy Cohn, and the marketing of shiny red tools of propaganda, Trump began openly acting on principles straight out of Mein Kampf  — the instruction manual for creating an authoritarian government from one that was formerly democratic.

Minus tanks, missiles or even a marching band, Trump announced his intention to run for president to a group of paid actors in the lobby of Trump Tower, descending his main escalator to the unauthorized strains of Neil Young’s “Rockin in the Free World.”

Flanked by his lovely third wife, a former model who was actually clothed for this announcement, no one took The Donald for a serious candidate in a field of 18 Republican operatives.

During the debate season, Trump’s approach, which seemed a mockery of the whole process, felt like it was being shot for a reality show, but it was happening in the real world and in real time. Looking back, perhaps it was the best way for Trump to set himself apart and spawn a cult of personality suitable for a massive following on social media.

But back then, no one thought it would be enough to start a movement.

In those early days, few who watched the three-ring circus led by an orange carnival barker were taking it seriously. Most believed a train wreck was coming, but isn’t that what they thought about that guy from Germany after his failed coup in 1923? Adolf Hitler was jailed for treason for his actions against the Weimar Republic, but during his nine months in the clink, he penned his biography while coming to the realization that seizing power legitimately was easier.

Charismatic and ruthless, Hitler toned down the brawling style of his Brownshirts and drummed up his message to the disenfranchised, along with fomenting hatred for Jews and pointing out the government’s shortfalls. By 1932, the Nazi Party had become a real force.

Like that reviled dictator from another age, Trump welcomed violence against those who protested at his rallies. He is now being sued by a former follower who says he was just following orders when he attacked an African-American protester in Kentucky in March of 2016.

Hailed by white supremacists, Nazis and bigots of every stripe, Trump and his veiled xenophobic message of “Making America Great Again” rolled into the dyed-in-the-wool Red States of Middle America, where he held rally after rally, extolling not a deft plan for how to bring factory-level jobs back to deprived areas, but rather the red meat of hate and division, the twin message both obvious and intentional.

He called Mexicans rapists and trumpeted the construction of a wall on America’s southwest border. It would be paid for by Mexico, he said, and if you were into that message, despite its absurdity, it got you excited and begging for more.

Trump later ratcheted up his hate talk to include Muslims, who Trump said should certainly be banned before they could invoke Sharia Law and finish President Obama’s secret plan to ruin the country. Because of the many attacks by radicals across the globe, Muslims were thrust into the primary role of scapegoat, eventually to be replaced in that role by Democratic presidential nominee Hillary Clinton. 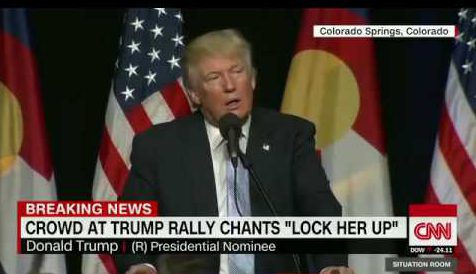 In order to continue building his base, Trump threw in a dash of Orange Scare, playing on fears of rural Americans already terrified by the specter of inner-city crime. He targeted Chi-town, which had a historically bad 2016, and is, of course, the home town of the outgoing president.

Hooting and hollering crowds at Trump rallies — initially maligned as extremists by their fellow conservatives — soon took the lead role in representing Republican thought as their candidate plucked off established GOP politician after GOP politician.

Called deplorable and stupid by the left and held at arm’s length by conservatives, Trump’s supporters seemed to revel in their depiction as hateful Neanderthals, and channeled their angst as a new alt-right patriotism that had always been present, but rarely celebrated.

It is actually wrong to label all or even most of Trump’s supporters as unintelligent or even uneducated, as those who supported  Hillary Clinton or her chief rival, Sen. Bernie Sanders, often claimed. But it’s a fact that during Obama’s ascendancy to the White House, many of his detractors jeered that the former constitutional law professor was an elitist and too educated.

All this comes to pass before the first ballot is cast.

Although Trump’s approval numbers have now sunk to 34 percent, he is still king — or führer — among his supporters.

When he won the keys to the White House, most knew the flamboyant Trump would want to be more than a politician, but few expected a lesson in autocratic rule from the New York real estate mogul who seems hellbent on changing the way our government is run.

Regardless of how improbable, Trump’s rise to prominence happened for a reason, be it a wonderfully run campaign or something else. But don’t dismiss the fervency of his followers, who made obtainable his dream of becoming our beloved leader.

It is for that reason that those early days in 2017 will always smell of jasmine and honeysuckle for The Donald.

Of course the haphazard circumstance tying these random incidents together is probably a coincidence, and conversely, the prose is obviously satirical. Or is it?

COMING NEXT SUNDAY FROM MASTATALKA AND THE SHINBONE STAR: Tell them a big lie.

5 thoughts on “Springtime for The Donald”