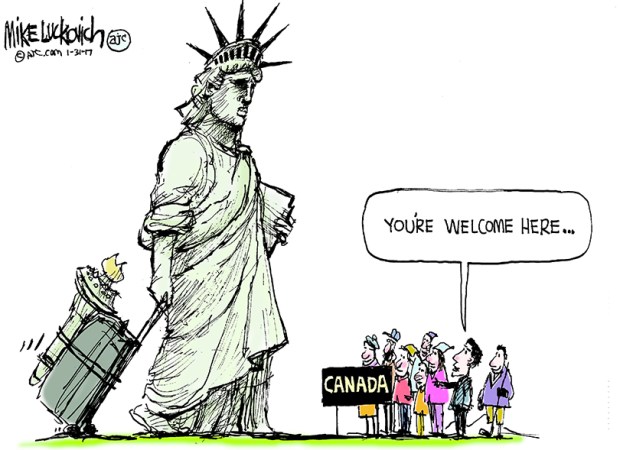 As a Canadian watching helplessly from north of the border, all I can do is scream at the laptop and the television and type “VOTE” over and over until my fingers cramp up. There used to be a time I could tell you the current political stories and climate for both countries; now, it’s more like “Trudeau who?”

I know I could walk away from social media (and I have at times) and I could shut my ears to the constant noise, but I just can’t. Most of us can’t. What has been a constant train wreck that was both cringe-worthy and entertaining in a circus kind of way has become one giant ball of horrific attack after horrific attack thrown at the citizens of a country I used to know.

What used to be a bit of joke for Canadians to heckle has become a tragedy of historic proportions. We still can’t look away, but we sure as hell aren’t laughing anymore. None of this is funny. Hell, watching “Real Time with Bill Maher” and “Last Week Tonight with John Oliver” no longer keeps me sane. I try to chuckle at their witty jokes, but I cry inside wondering if the disaster down below is a survivable event.

I commend the likes of Maher, John Oliver, Jimmy Kimmel and Samantha Bee. To go on air weekly or nightly and try to make people laugh about that thing in their Oval Office that is ruining their great country one hateful tweet at a time makes my heart hurt for them. I know I have run out of steam so I can only imagine what my American friends are feeling right now. You can see the exhaustion on their faces. It’s pretty bad when Stormy Daniels has to be the one to carry the humour on Bill Maher’s show.

It’s a scary time right now. For Americans and for anyone who believes in democracy. Nationalism and racial divide is popping up all over the globe. Europe is in disarray and hate groups are on the rise. There are 49 countries that are officially ruled by dictatorship. That may not sound like a lot, but given how influential the United States is globally, the fact that the piece of garbage currently now running the country routinely threatens freedom of the press and attempts to dismantle the Constitution while cozying up to ruthless leaders gives governments in struggling countries a renewed energy to do the same. Here’s a map below to give you some idea of “freedom” in the world. Green is free, at least for now. Let that sink in.

We are all watching the decline of democracy globally, and the Great Ape in Charge of America is leading the parade. The sad part is, he doesn’t even really know it. It was never his intention; his intention is to WIN. At any cost.

So all we Canadians can do is sit and watch, and freaking hope beyond all hope that every American citizen gets out there on Nov. 6 and VOTES!!! Because if Trump and the Republican Party win and keep the majority, the cost will be huge and will be felt everywhere. The ripple effect of hate and malignant tribal politics will be far-reaching and even harder to beat come 2020. Even if it’s a Democratic sweep in November, it’s still an uphill battle to regain the political dignity that the Big O and his cronies have destroyed.

We aren’t laughing anymore. There’s no more condescending Canadian humour at the expense of our American friends. How could anyone joke about the idiot in the White House when people are dying at the hands of hate? No, we are frightened for you and we hope you can win this fight. We are behind you 100 percent.

So I will just say it one more time:  PLEASE GET OUT AND VOTE!!!

22 thoughts on “It’s Not Funny Anymore”