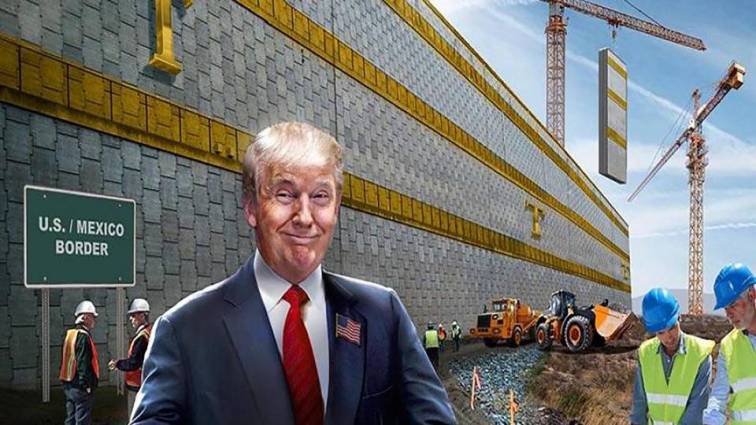 No matter how The Donald slices it, The Wall is a failed campaign promise. He can pull money — American taxpayer dollars — from departments or agencies in the federal government to cover construction costs, but Mexico will not pay for the concrete “white elephant” as he promised on the 2016 presidential campaign trail.

The Donald failed to fulfill his commitment to the American people on this one. Our hard-earned dollars, paid to the U.S. Treasury through taxes on our income, will be spent on an ego-boosting structure for Trump that law enforcement experts agree will have little impact on thwarting the flow of illegal immigrants determined to enter our country, or the drugs that are sold on American streets every day.

Donald Trump can brag all he wants about getting the deal done, but it’s not the deal he promised. Not even close. He thoroughly failed as a negotiator to deliver The Wall as described in countless video clips of campaign speeches he delivered in the fall of 2016.

All Americans need to remind The Donald of this tragic failure, of this broken campaign promise, of abusing our tax dollars to satisfy his self-serving commitment to a needless and useless construction project.

Repeat it often to everyone you hear gloating about how The Donald won this battle. No, he lost it. Mexico did not pay for The Wall. Remind those who support the misguided concept that their mindless leader walks away with a “W” on this one that we, the American taxpayers, are footing the bill. Not Mexico.

Remind them, too, that their contribution to funding The Wall probably increased this year since The Donald’s so-called tax cut has turned out to be about as large a scam on the average American worker as The Wall itself. Yes, many of your fellow citizens are either getting fewer dollars back or are sending more bucks to the U.S. Treasury as a result of legislation The Donald signed into law back in December 2017.

Forgive my digression: The Wall is the issue at play today.

The Wall as a failed campaign issue goes beyond the funding question. The Donald’s rhetorical blasts attempting to justify constructing his monstrosity of a border barrier albatross painted an image of a dark, violent and out-of-control southern border. His divisive verbal attacks on cities such as El Paso and San Diego sent a chilling wind through the city halls and convention and visitors bureaus in those cities.

The Donald’s bragging points about how The Wall would finally deliver an impenetrable southern border was a morale-busting attack on thousands of dedicated border agencies and personnel who for decades fought — successfully, it must be noted — to improve conditions along our country’s shared border with Mexico. FBI statistics show that starting in the mid-1990s, violent crime along our southern border declined dramatically even before any barriers or fences were built.

The Wall in The Donald’s warped view of reality represented the worst of his racist view of American supremacy. Time and again he labeled immigrants — legal or illegal — seeking asylum from south and central American countries in the same negative light: these people, he would shout from his latest campaign platform or the Cabinet room of the White House, often traveling in caravans sweeping across Mexico intent on invading the United States “are rapist, killers, the worst” type of people coming from countries rife with crime and drugs.

The Donald’s anti-immigrant campaign, showcased best in his obsession with constructing The Wall, fails all Americans whose ancestors traveled here decades if not centuries ago: immigrants who found riches beyond dollars in a bank account in neighbors, friends and new family members; who fought and gave their lives to defend the principles of our country — life, liberty and the pursuit of happiness — on battlefields around the world; and who work at jobs many of us would find difficult to handle on a daily basis.

The Wall as a campaign issue fails us as a strong, caring country, a shining light for democracy around the world.

The Wall, if built, just like its creator, is a failure that will cost us much more than we will ever know.

Remind The Donald and his lemmings about this failure as often as possible.

2 thoughts on “The Wall: A Failed Campaign Promise and More”