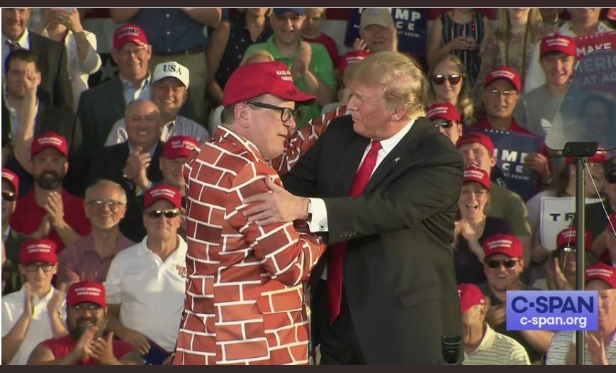 The disabused old saw that the only book Donald Trump ever kept at his bedside was Adolf Hitler’s Mein Kampf — the German dictator’s post-World War I vision for a Utopian Aryan universe — is perhaps true.

The observation is at least a fair assumption. On Monday, Trump held a taxpayer-paid trip to a campaign rally in Montoursville, Pa., where his “Make America Great Again” campaign found nirvana among the unemployed coal miners and formerly well-paid steel workers who rejoiced listening to him rant about the unfairness of it all.

The roots of Trump’s most scurrilous rant to date are found in a tweet he penned early last Friday morning, towards the end of a week-long Twitter blitz precipitated by day after day of bad political news. In it he claimed the FBI’s investigation of his presidential campaign was an attempt at a political coup.

“My campaign for President was conclusively spied on,” Trump tweeted. “Nothing like this has ever happened in American Politics. A really bad situation. TREASON means long jail sentences, and this was TREASON!”

On Monday, Vox posted a video of Trump in front of Air Force One, parked on the tarmac at the Montoursville airport before his evening political rally, accusing the FBI and the Democrats of treason.

During his familiar monologue about: Hillary, fake news, historically low black unemployment and the wretched Democrats, Trump joked about serving as many as five terms as president.

“And maybe if we really like it a lot and if things keep going like they are going, we will do what we have to do, and a three [terms] and a four, and a five.”

The crowd screamed “lock ’em up, lock ‘em up” while Trump went  into his nodding donkey routine, basking in their rapture.

It was a typical Trumplandian affair until he accused the Federal Bureau of Investigation and the Democrats of “treason.”

In most societies, treason is the vilest of crimes and usually calls for the swift and certain execution of the perpetrators. The United States is not an exception, although in contemporary times, stringing up traitors like chickens in public view has given way to more private ends.

After stirring up the rabble, Trump promised his “great new attorney general who will give it a very fair look,” inferring his legal butt boy William Barr will investigate the FBI and the president’s political enemies for treason. Even in jest, it is an ominous forecast.

Hitler did the same thing at a huge Nuremberg rally in Bavaria in 1937. He already had his hands around the throat of Germany, but he wanted it all. Symbolic Nuremberg – an important city in Nazi legend — was the despot’s favorite place to strut his stuff in jodhpurs and jackboots. For the 1937 event, the Nazi party commandeered the city’s giant airship park that held 350,000 screaming Nazis. The entire world was enthralled by the hypnotic hold Hitler held over the Nazi faithful who joined him there.

In Germany, the 1937 rally was known as the Reichsparteitag der Arbeit (Nazi Party of Labor). The program included huge anti-aircraft spotlights featured in the propaganda movie Festliches Nürnberg, which included a cast of 45,000 boys and 5,000 girls enrolled in Hitler Youth.

By the end of 1938, Hitler’s minions had replaced every democratic institution in Germany with Nazis, assuring he would be supreme leader and final arbiter of all things German.

Like the budding Nazis at Nuremberg, Donald Trump’s slavish followers in Pennsylvania are dazzled by a pariah who promises so much while keeping them teetering on the edge of complete ruin. The fact that Trump is a conman, liar, cheat, philanderer and generally amoral human being without the ability to distinguish between truths, falsehoods, and distorted exaggerations apparently makes no difference to them at all.

Trump’s baseless accusation of treason is based on his perception that the FBI’s investigation of his presidential campaign was inspired by skulking spies intent on undermining his version of a free and open election.

“… there are people out there that have done some very, very evil things, very bad things — I would say treasonous things — against our country,” he claimed last March.

This time, however, he expressly claimed treason and called for retribution. “Lock ‘em up,” his demented fan base howled after every allegation. It has become their mantra.

Treason against the United States, shall consist only in levying War against them, or in adhering to their Enemies, giving them Aid and Comfort. No Person shall be convicted of Treason unless on the Testimony of two Witnesses to the same overt Act, or on Confession in open Court. The Congress shall have Power to declare the Punishment of Treason, but no Attainder of Treason shall work Corruption of Blood, or Forfeiture except during the Life of the Person attainted.

Like all things evil, what comes around always goes around. It happened to the Nazis, and it will happen to Trump.

Between 1945 and 1946, immediately after the end of World War II in Europe, German officials involved in war crimes and crimes against humanity during the six-year war were brought before an international tribunal at the so-called Nuremberg trials. Twenty-one defendants, the surviving scum that rose to the top of the foul Nazi stew, stood trial. Hitler’s deputy, Martin Bormann, had escaped capture and was tried in absentia.

Eleven of the defendants present at the trials were sentenced to death for war crimes and crimes against humanity.

On Oct. 16, 1946,  ten condemned villains, all survivors of the military and political leadership of Nazi Germany, were executed one after another by hanging. The condemned included Hans Frank, Wilhelm Frick, Alfred Jodl, Ernst Kaltenbrunner, Wilhelm Keitel, Joachim von Ribbentrop, Alfred Rosenberg, Fritz Sauckel, Arthur Seyss-Inquart and Julius Streicher, the vicious voice of Nazism. Vice Chancellor Hermann Göring escaped the noose by ingesting smuggled potassium cyanide the night before he was scheduled to hang.

There is a powerful lesson in that moment in history, and Trump and those who aid him in the demonization of democracy would do well to heed it.