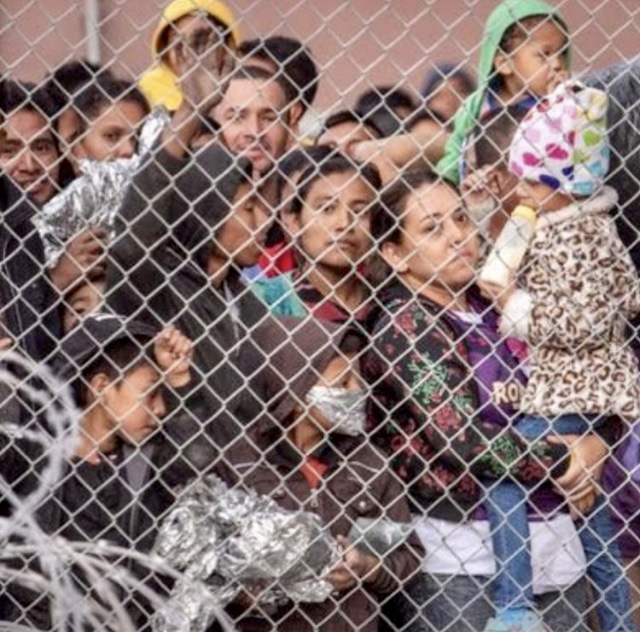 A lot of nights lately, I find it hard to sleep.

I think about those poor children in the immigration camps huddled together on a concrete floor ––miserable because of inadequate sanitation, no medical care, drinking water from toilets like dogs, and in their fear, having no one but each other to hug and comfort.

I think about what kind of environmental or climate change disaster is waiting in the future for my grandchildren to endure when the ominous signs are already here: summer hail storms in Mexico while it’s 84 degrees in Antarctica.

I think about a field of 25 Democratic candidates for the presidential race and how each of them possesses some good qualities, experience, stage presence, and intelligence––but how not one of them gets me excited enough to believe in a victory in 2020. Not yet, anyway.

I think about how our former allies around the world are looking at us and shaking their heads in disgust.

We should all be disgusted by the antics of the Despicable-in-Chief, a man who enjoys photo ops with murderous dictators and embarrasses this nation on an hourly basis. All the world’s a stage, and this reality show huckster is playing everyone for a sucker––especially the GOP and his “base” of supporters.

When I picture the latter, I envision Ma and Pa Kettle in their flour sack shirts and overalls, slavering with delight when he’s tweeting insults and lies from his golden toilet.

I can envision Tammy Faye Bakker look-alikes clutching their pearls, their Bibles, and the golden crosses around their necks as they shriek about the murder of fetuses while living, breathing children are being terrorized and scarred emotionally.

I imagine the self-made CEO playing golf in his red MAGA hat, chuckling about his corporate tax breaks and the flaunting of environmental protections while the middle-class Joe is struggling to figure out how to pay for his insulin this month.

I see Homer Simpson in a KKK robe and his son, Bart, waving a flag with a swastika on it during the Charlottesville march while James Alex Fields Jr. revs the engine on his 2010 Dodge Challenger.

I envision a phalanx of GOP shills who know they’ve sold out their party, but continue to kiss the Turnip’s ass while the “Dueling Banjos” tune from Deliverance plays.

I picture a whole bunch of blatantly stupid, arrogant, heartless people who were easily duped into thinking this is where we should be going as a nation.

How did we get to such a pitiful state? I lie awake at night and wonder. And unable to sleep, I surf the Internet, looking for names and faces of people whom I called friends in better times. Sadly, I discover that many of them have been duped as well. I find the Facebook page of a former co-worker who has posted this meme: “Dear Democrats, if a million Russians came into our country to vote for Trump, would you be okay with that?”

And then it hits me: They’ve bought into his lie about the illegal voters and they’re afraid.

They’re terrified that thousands of brown people are crossing the border illegally and will soon be registering to vote and doing so illegally, too. This is the first myth that ate away at the Turnip’s ego immediately after the 2016 election –– that thousands of illegal voters robbed him of the popular vote. He didn’t feel loved enough, so he peddled a horror story. Nothing rallies people faster than fear.

“Brown people are taking your jobs, raping your women, peddling drugs, running gang wars, and worst of all, they’re voting illegally for Democrats! We have to stop this now. We have to build a wall to keep them out!” screams Chicken Little, pointing to the falling sky.

The wall is his dream and his legacy and a monument to his ego. Never mind that it won’t be effective in deterring refugees from finding a way under, over, or around it. The wall is just a symbol, his nasty counterpoint to the welcoming words on the base of the Statue of Liberty.

The truth is that, one by one, states started passing laws preventing non-citizens from voting more than 100 years ago when immigration into the country came by way of Ellis Island instead of the Rio Grande. By the election of 1928, there wasn’t a single state that allowed immigrants to cast a vote.

But fast forward to October 2015, when California Governor Jerry Brown signed the New Motor Voter Act, automatically registering eligible people to vote when they apply for drivers‘ licenses –– the operative word here being “eligible.” This is what threw the Turnip into a tailspin, claiming massive voter fraud that favored Hillary Clinton for the popular vote.

The slim probability of non-citizens voting en masse is not their real worry, although the huckster likes to perpetuate that lie. At the core, Republicans are more concerned that increased populations of brown people –– whether they are eligible to vote or not –– will leave a deep blue stain on the Electoral College. Hence, the battle over the citizenship question on the Census.

The Grand Old Party is so terrified of the brown wave that they continue to slavishly embrace the very dictator wannabe they believe can save them from that. If they looked closer, they’d see the Emperor has no clothes –– and that he has a history of changing his party affiliation on a whim.

He first registered as a Republican in 1987, but has seesawed between parties five times. In 1999, he registered as an Independent. In 2001, he became a Democrat. By 2009, he was ready to be a Republican again. In 2011, he claimed no party affiliation or Independent again. By 2012, he was back to the Grand Old Party.

When he decided to run for the presidency (on a whim, based on a cocktail party bet and to gin up the ratings for his TV show), he chose the GOP as an easy mark to fall for his lies and his manipulation of their fears. They’re the perfect dupes.

They stand behind him as he kowtows to Putin, to Kim Jung Un, to the Saudi Prince. They saluted him in the pouring rain during his Fourth of July speech, which was staged –– at taxpayers’ expense –– so he could tape a campaign commercial.

Which brings us to the possibilities ahead in November 2020, when we’re going to need a landslide Democratic victory.

If the Turnip doesn’t get the second term he craves, expect a war. Four more years are the only thing standing between him and certain indictments to come when he’s no longer shielded by the presidency, so he will not go quietly. He’ll pout and scream and throw a tantrum and declare the election is invalid because of fraudulent votes.  He might throw down another Executive Order.

If you think we have checks and balances in place and that it could never happen –– not in this country –– think again. Think about all the other unthinkable crap that’s gone down in the last two and a half years and then try again to reassure me this country is safe from the destructive, self-serving whims of the madman.

Who has the ability to bring down the Turnip?  Elizabeth Warren has a plan for everything. Pete Buttigieg, Beto O’Rourke, and Cory Booker are all fresh faces with big ideas. Kamala Harris has the fighting spirit of a prosecutorial bulldog.  Marianne Williamson thinks love is all we need.

Even if he has some questionable social skills around women who use scented shampoos, Uncle Joe Biden has experience and wisdom, and older black voters still see the Obama brand on him. In the national Monmouth University poll of mid-June, 59 percent of Democratic voters said Biden had the best chances of beating the Turnip. No other candidate came within 20 percentage points of that ranking. Bernie Sanders came in second at 39 percent.

Democratic policies, plans, and promises are great, but in the end, the only issue that really matters to me is getting this country back on track. Normalcy. Civility. Progressive initiatives. And maybe then,  I can start sleeping at night.

3 thoughts on “How the hell did we get here?”