Welcome to Trumplandia, a place where with a bit of wit and snark, we keep the world caught up on all of the tasty Nuggets-O-Trump you may have heard about but were too busy to care. Because most of this minutia occurs just below the massive headlines about the POTUS, it’s in a land of its own. Here, an infusion of social media, video clips and print media meld with our outdated political views to make more delicious “Fake News” about our Commander-in-Chief.

The President has been impeached – and nothing either he or Leader McConnell can do will change that. #RealTime pic.twitter.com/SVeuVW4I2g

Caught, Can We Get a Witness?

The week of our Trump — Jan. 18, 2020: Members of the U.S. Senate formally opened the impeachment trial of the 45th president of the United States, Donald John Trump, this week, answering the calls for speedy adjudication by Republicans.

Operating under the restrictive rules of Moscow Mitch McConnell, the trial was set to only allow each political party 24-hour sessions spread out over three-days in eight-hour segments, and put the “B” in boring.

Stripped of all the normal trappings of judicial sessions, (i.e. witnesses and documents), Democratic members of the House of Representatives presented both articles of impeachment in painful detail by first laying out how The Donald allegedly obstructed Congress and then, by doing so, abused his presidential power in the investigation involving Ukraine.

Presided over by Supreme Court Chief Justice John G. Roberts, House Intelligence Committee Chairman Rep. Adam Schiff, (D- Ca.) served as lead impeachment manager for the House Democrats and laid out the case against Trump for extorting a foreign leader by holding up military aid in exchange for dirt on Trump’s potential political opponent in the 2020 election.

Trump can be convicted of the charges or acquitted, but his removal would require a two-thirds majority of the Senate — 66 votes. No president has ever been removed from office or convicted by Senate vote.

Proceedings began on Jan. 21 when the rules were to be set by the Senate, but instead became a showcase for a pack of lies that Trump’s legal team pulled out of their attache cases.

White House Counsel Pat Cipollone and Trump personal attorney Jay Sekulow read from prepared statements and suggested, among other things, that Republicans did not have access to key evidence during the hearings in the House of Representatives, and that Schiff created a false narrative about what was said on the now infamous July 25, 2019 telephone call between Trump and Ukrainian President Volodymyr Zelensky.

The lie about “shifty” Schiff has been told and re-told, mostly by Trump during nearly every social event since the investigation began.

Interviewed while at the economic summit in Davos, Switzerland, Trump said he was proud of what his defense team had done, particularly with the yarns spun by Cipollone. Trump said Cipollone was able to present his case with a level of emotion he’d never seen before. “Pat is a brilliant guy, but I’ve never seen that emotion, and that’s real emotion,” Trump said.

After the fibs from Trump’s attorneys, Senate Minority Leader Chuck Schumer (D-N.Y.) attempted no fewer than 11 times to amend the proceedings to allow witnesses and documents be presented for the trial. All efforts were tabled by McConnell to be considered after the trial.

Later, House Judiciary Committee Chairman Jerrold Nadler (D-NY) and Cipollone went at it after the New York Democrat accused the Trump legal team of covering up the facts that led to the impeachment, as well as not providing Congress with the requested documents. The two were admonished by Justice Roberts and reminded they were in the Senate, recognized as “the world’s greatest deliberative body.”

The next day, Democrats laid out the obstruction of Congress case and carefully listed the events that led to the House’s request for the information and witnesses that were denied by the White House. 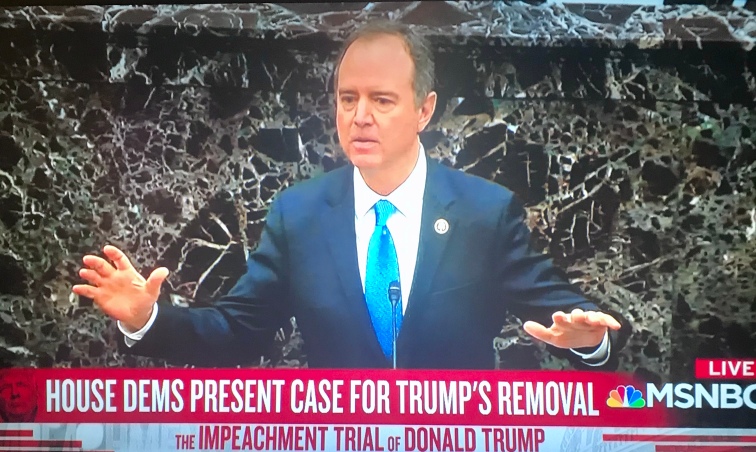 The highlight of the Democratic presentation came on the third day, when Schiff made an impassioned plea for his fellow members of Congress to vote to convict and then remove Trump, who he called a “danger to national security.”

Schiff said Trump cannot even be counted on to call out bad actors regardless of who may try to interfere in the upcoming election this fall:

“Can you trust Donald Trump to stand up to them, to protect the country? You know he won’t.”

Schiff Later summed up why the House says Trump must be removed from office before the election. He told members of the Senate that truth matters:

The marathon impeachment sessions drew not only the attention of the public, but evidently made members of Congress, particularly Republicans do the wacky.

Early on, Chief Justice Roberts had to warn both sides to stop their “pettifogging.” The warning would not be the last time the three-day presentation by Democrats would be marred by foolishness.

On Wednesday, Republicans railed against a presentation from Schiff by defying age-old rules and customs of the Senate by leaving their seats during the presentation. Rules stipulate that senators are expected to be at their desks for the entire trial.

An estimated 21 senators defied the rules, with more than one-third of the 53 Republican who are expected to rule on the president’s fate missing the same segment of the historic trial. Those who left included: Lindsey Graham (R-S.C.); Bill Cassidy (R-La.) and Jim Risch (R-Idaho).

Risch also had the dubious distinction of being the first member of Congress to fall asleep during the trial proceedings the day before.

The breaks violate not only tradition, but a request Schumer made in his letter outlining rules for the proceedings in which he stated:

Due to the length of presentations and the reinforcement of their points with documents and testimony many have already reviewed, some Republicans complained the many hours of impeachment materials read into the record by House made each day seem like “Groundhog Day.”

According to Congressional Quarterly, on Jan. 23, Sen. Richard Burr (R-N.C.) took the daily cake by providing his allegedly bored colleagues with assorted fidget spinners and other toys to help them pass the time. Of course, they should have been listening to testimony that lays out why Trump is a dangerous traitor, but why listen when you already know the outcome?

Later that day, Sen. Marsha Blackburn (R-Tenn), openly questioned the veracity of war hero Lt. Col. Alexander Vindman by categorizing him on Twitter as “a political activist in uniform.” Vindman, a National Security Council official, testified during the House segment of the impeachment inquiry and said he was shocked by what Trump and his personal attorney Rudy Giuliani were doing in Ukraine.

Thought by some to have been the official who leaked the contents of the Trump/Zelensky call to the whistleblower, Blackburn said Vindman “broke the chain of command” and should be viewed as vindictive.

His attorneys differed, and instead criticized Blackburn, who also ignored House members’ presentations in the Senate, opting instead to read a book during the historic trial.

The second article of impeachment was for obstruction of Congress: covering up witnesses and documents from the American people.

This morning the President not only confessed to it, he bragged about it:

Trump went to Switzerland for the annual World Economic Forum in Davos this week, but his mind was not far from his trial in the nation’s capital. Trump told a reporter on the first day of the summit he was not going to give the hoax and sham another moment’s thought, which turned out to be perhaps the first truthful thing Donnie Dimwit has said in a good, long while.

The next day, he devoted more than a thought to what was going on at home, tweeting a record 142 times about impeachment, which shattered his previous daily tweet-fest record of 123 when members of the House Judiciary Committee held a Dec. 12 debate on the articles of impeachment.

Still not admitting to be bothered by his impeachment, Trump again spoke about his trial on Jan. 22 when, during a press conference, he appeared to go off message and admitted that he has in fact been obstructing Congress. With regards to the documents requested by House Democrats, Trump said:

During the same news conference, Trump also admitted he would love to participate in his impeachment trial, but he’s been advised by is legal team that he cannot. In fact, Trump said he love to “eyeball” the Democrats prosecuting the House’s case against him:

“I’d love to go, wouldn’t that be great?” I don’t know, I’d sort of love to sit in the front row and stare in their corrupt faces, I’d love to do it.”

He also seemed to indicate that he and McConnell had a difference of opinion on the calling of witnesses to testify at the trial. Trump said he favored witnesses and “would be open” to Secretary of State Mike Pompeo, Acting White House Chief of Staff Mick Mulvaney, and former National Security Adviser John Bolton testifying.

Trump went on to worry that Bolton, who knows some of his thoughts on leaders around the world, might share some of what he thinks and thus create an international problem.

Bolton has said he would testify if subpoenaed by the Senate. He has referred to operations involving Rudy Giuliani and an apparent campaign to find dirt on Democratic front-runner Joe Biden and his son Hunter as a “drug deal” with which he wished not to be involved.

It’s a good thing all of this impeachment stuff is so good for Trump’s re-election efforts.