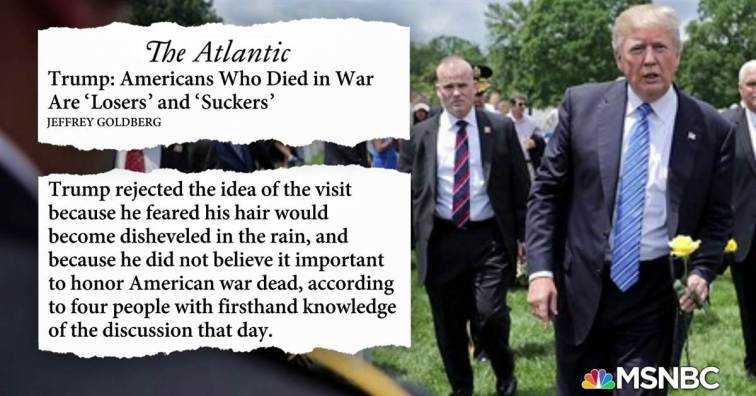 EDITOR’S NOTE: Our week in review column, Trumplandia, has been pushed to tomorrow in order to continue uninterrupted coverage of Donald Trump’s disrespect for America’s military. Trumplandia will return to its regular Saturday slot next week.

Americans who died in war are “losers and suckers” according to the commander-in-chief, who never served a single day in the military thanks to alleged bone spurs in his feet. When Jeffrey Goldberg published his op-ed in The Atlantic on Sept. 3, he laid bare the mortifying truth about Donald J. Trump with multiple tales of disrespect for American servicemen and women.

“Losers and suckers” is what he called 1,800 servicemen who lost their lives in the 1918 World War I Battle of Belleau Wood. A century later, Trump declined to visit the cemetery where they are interred, saying he didn’t want the rain to muss his hair.

“Why should I go to that cemetery?” he asked. “It’s filled with losers.”

The day after The Atlantic published, Trump issued a statement calling the article “fake news” from a “second-rate magazine” that was failing, but it didn’t take long for news outlets to dig deeper and find much of what Goldberg had written was factual. This included fact-checking by reporter Jennifer Griffin of Trump’s beloved Fox News network.

I was appalled — but not surprised — to read just how little regard he has for those who have sacrificed their lives in service. I was even more appalled that his supporters continue to give him a pass.

“Don’t believe everything you read,” one person commented about the article on social media. “Listen to Trump himself.”

Therein lies the problem for the commander-in-chief seeking a second term: His very words have come back to haunt him. They are indisputable and everlasting, available on tape and video and in his endless Twitter rants.

Consider his 1993 interview with Howard Stern when he twisted his explanation of staying home during the Vietnam War by saying it constituted “bravery” because he was dodging STDs and AIDS.

“It’s amazing, I can’t even believe it. I’ve been so lucky in terms of that whole world, it is a dangerous world out there. It’s like Vietnam, sort of. It is my personal Vietnam. I feel like a great and very brave solider.”

The real estate mogul then dug in deeper by telling the radio shock jock that women’s vaginas were “potential landmines” with “some real danger there.”

Goldberg’s piece in The Atlantic relays what happened in August 2018 when McCain succumbed to brain cancer, and lawmakers from both sides of the aisle lauded him with tributes that incensed the president.

“We’re not going to support that loser’s funeral,” said Trump, who reportedly became furious when he saw flags lowered to half-staff in McCain’s honor.

Trump allegedly told his aides: “What the fuck are we doing that for? Guy was a fucking loser.”

Trump was not invited to the funeral, and he never apologized to McCain’s family. He didn’t feel the need to apologize as he noticed an uptick in his approval ratings.

Political rivalries aside, the commander-in-chief has also insulted Gold Star families, including the Muslim parents of Humayun Khan, who was killed in Iraq in 2004. Khizr and Ghazala Khan appeared at the 2016 Democratic National Convention.

“Have you ever been to Arlington Cemetery?” Khizr asked Trump rhetorically. “Go look at the graves of brave patriots who died defending the United States of America. You will see all faiths, genders and ethnicities. You have sacrificed nothing — and no one.”

Trump was not about to let that stand, hitting back by claiming that Mrs. Khan was not allowed to have anything to say and by countering that his “sacrifice” involved creating jobs and building skyscrapers.

When U.S. Army Sgt. La David Johnson’s body was brought home from Niger in 2017 after an ambush that killed four American soldiers, his pregnant widow went public about a call she received from Trump. She said Trump struggled to remember her name or her husband’s. He was callous in his ham-handed approach to “condolences,” she said.

“He knew what he signed up for,” Trump told Myeshia Johnson — words that were verified by Rep. Frederica Wilson, D-Fla., who was privy to the call.

On Memorial Day of that same year, Trump stood in Arlington National Cemetery with then Secretary of Homeland Security John Kelly. The two were in Arlington’s Section 60 paying respects to Kelly’s son Robert, a U.S. Marine Corps lieutenant who was killed in Afghanistan in 2010.

“I don’t get it. What’s in it for them?” Trump allegedly asked Kelly, who declined to comment on the anecdote in Goldberg’s op-ed. But a friend of Kelly’s, a retired four-star general, offered this explanation:

“He can’t fathom the idea of doing something for someone other than himself. He just thinks that anyone who does anything when there’s no direct personal gain to be had is a sucker. There’s no money in serving the nation.”

Even Kelly, who went on to become Trump’s chief of staff, eventually realized there’s something lacking in the president’s character. In June, after Trump’s infamous photo-op that required the National Guard to disperse protesters in Washington, D.C.’s Lafayette Square, Kelly said:

“I think we need to look harder at who we elect. I think we should look at people that are running for office and put them through the filter: What is their character like? What are their ethics?”

As of Sept. 5, Kelly has neither confirmed nor denied the allegations in Goldberg’s article.

Other military leaders who spoke out against Trump after that fiasco included:

More than 49 percent of active-duty military personnel view the commander-in-chief’s leadership of the military as either unfavorable or very unfavorable, according to a survey conducted by Military Times in July and August. Nearly 60 percent of the officers’ corps surveyed said they have a have an unfavorable view of Trump.

The manner in which Trump has also failed American veterans, whose suicide rates have risen during his tenure, would require a separate detailed article, but his attitude has been clear. In January 2020, he referred to concussions and other severe combat injuries suffered by military personnel in Iran as mere “headaches.” In making plans for a military parade, Trump nixed the idea of including injured veterans and amputees. “Nobody wants to see that,” Trump said, according to Goldberg’s article.

Such a callous and clueless commander cannot expect to have the support of the military in his bid to claim a second term, but the most recent nail in his re-election coffin might have come during the Democratic National Convention in August.

“Today, we are a country divided, and we have a president doing everything in his power to make it that way and keep us that way,” said Powell, a Republican who served under George W. Bush. “What a difference it will make to have a president who unites us, who restores our strength and our soul.”

3 thoughts on “Only losers and suckers will vote for Trump”