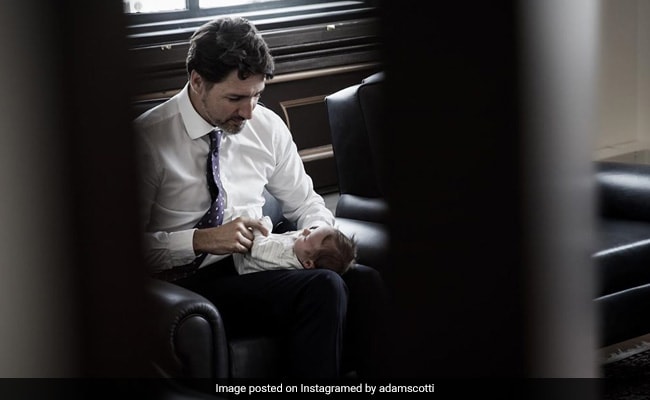 EDITOR’S NOTE: Sick of Donald Trump? So are we, so The Shinbone Star’s Canada Bureau Chief decided to give American readers a view of what’s been happening north of the border. Hey, it’s tough all over.

The headlines read, “To Make Work Easier For His Official Photographer . . .” and social media shared Scotti’s perfectly adorable pictures with equally adorable hashtags. So adorable. So hip, in a sepia-toned airbrushed kind of way. And oh, so convenient.

Because babies are so much easier than blockades.

On Feb. 10,   The Wet’suwet’en Nation in British Columbia put up a blockade at the only entrance on to the grounds of the proposed Coastal GasLink LNG Pipeline project. Trudeau smiled and extolled the virtue of patience. Weeks went by and Trudeau couldn’t even make the trip to British Columbia to meet with Premier John Horgan or any of the leaders of First Nations. That one blockade erupted into a national nightmare when the RCMP raided it in an attempt to take it down.

In solidarity with the Wet’suwet’en, other First Nations bands and activists across the country put up their own blockades, began protests, and set tires on fire along railways. Oh the irony in burning rubber to save the land. The railway fires paralyzed both CN and CP rail, leaving passengers stranded and cargo undelivered for the entire country.

It was a big financial loss for CN and CP Rail, and some railway workers were even laid off. Make no mistake, this is not just a little wrinkle in our economy. This is a significant impact on all of us locally, across the nation and internationally.

Still, Trudeau did nothing. Oh, wait . . . he did change his tune and say, “the blockades must come down,” but that statement just added more confusion and chaos: Did he want the RCMP to get involved? Did he talk to any of the First Nations leaders? Is this just more rhetoric from a useless leader?

Finally, after three days of talks, a tentative agreement was made between the federal government (minus Trudeau) and The Wed’suwet’en Nation in B.C. But the drafted deal doesn’t even address the Coastal GasLink pipeline.

Solidarity blockades continue across Canada, causing railway disruption, arrests and court injunctions. Trudeau uses nice words like “peaceful” and “respectful,” and he talks a big game. But even Quebec was demanding military aid to help break up the blockades. The threat of violence has been escalating in parts of Ontario and Quebec. Trudeau rubbed his beard and again, did nothing.

Thankfully on Thursday, The Kahnawake First Nations people, in a gesture of good faith, removed their railway blockade and moved their protest to a nearby spot. Who needs a prime minister anyway?

The division in this country is deep  and it’s only getting worse. Racism is higher, taxes are higher, wages are lower and the jobs are scarce. According to the experts, it’s only the beginning of Canada’s demise. Minorities are angry, rightfully so, and provinces are losing their patience with the government. At this point it doesn’t matter what side you are on or who you voted for. We’ve all lost with Justin Trudeau at the helm.

Canada’s democracy is on shaky ground, and globally, the message we have sent is this: “We have no idea what we’re doing so invest here at your own risk.”

According to the government, the rail blockades, particularly in Ontario where the Mohawk First Nations was able to stop almost 1,000 freight trains, has cost the Canadian economy hundreds of millions of dollars. Everything from fuel to wheat couldn’t be moved and everyone from the farmers to the miners suffered. Fires are still burning and nothing has actually been resolved.

A project that had been approved and ready to go for awhile now has to stop and start all over again because Canada can’t get it’s shit together, and the real kick in the gut? Teck Resources has pulled out its bid on Frontier Mine in Alberta, a $20 billion project. The application has been on the prime minister’s desk for months, waiting for his signature. But coincidence or not, Teck pulled out amid the protests and the company’s statement sounds a lot like our Wannabe Climate Change Hero’s. Jonathan Wilkinson, Teck CEO and president Don Lindsay said the decision was made in light of the broader conversation around climate change in Canada. And that they were “disappointed” to make this “difficult decision.”

Trudeau will be happy that his climate change plan is working . . . at the expense of the country he’s in charge of leading.

Reconciliation with our indigenous peoples is complex and contentious. Climate change is also complex, and the fight against it should be a priority for all nations. But we need a Plan B if we are going to eradicate the very thing that keeps Canadians fed and housed. And we need a prime minister who will actually govern and lead, even when the job gets tough.

It’s not all babies and photo ops, Justin.

According to our useless leader, Canada’s shitty economy is due to the Coronavirus. Huh? So it was secretly killing our economy these past few years?

I guess we didn’t wash our hands enough. You know, to save our water.

7 thoughts on “Babies and Blockades. A Canadian Tale.”